Note: This dog is not a recognised breed with the Australian governing body (ANKC). If purchasing a pup try to buy from breeders who are registered with other governing organizations, such as the Australian National American Bulldog Club 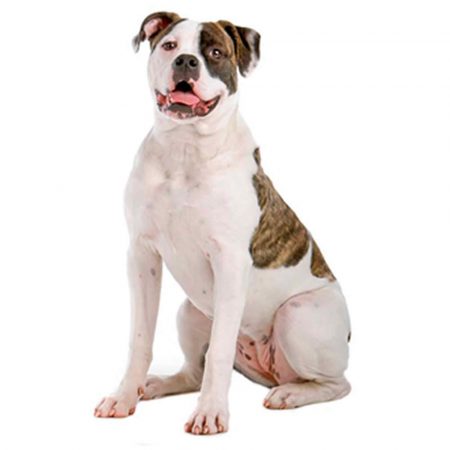 Early Bulldogs were used in bull baiting. Some of these dogs went with their masters from England to America. Eventually the English Bulldog was bred down in size and his personality was softened, but the American version remained a larger, fiercer dog. The American version has longer legs and more speed and agility than the English show dog. Thanks to the efforts of John D. Johnson of Summerville, Georgia the American Bulldog exists today.

The American Bulldog has also been used as a guard and in hunting bear, wild boar, squirrel and raccoon. They have even been trained to drive cattle and guard stock from predators. Farmers prize these dogs for their stamina, protectiveness, intelligence and working abilities. Some of the American Bulldogs talents are hunting, guarding, tracking, weight pulling, and guarding.

Appearance: Large, very muscular, sturdy dog with a large, powerful head and jaws. He is very strong, but agile and light on his feet. The head is square and broad with muscular cheeks and a furrow between the rounded eyes. The strong muzzle is shaped like a box. A variety of ear types are acceptable including rose, half-pricked and pendant.

Temperament: American Bulldogs should not be excessively timid, shy or aggressive towards man and preferably not overly aggressive with other dogs.

Colour: Combinations of solid or varying degrees of white, all shades of brindle, brown, red, or tan.

Grooming: The short, harsh coat is easy to groom. Comb and brush with a firm bristle brush, and bathe only when necessary. This breed is an average shedder.