Recommended: As a working dog, or for active people & families. 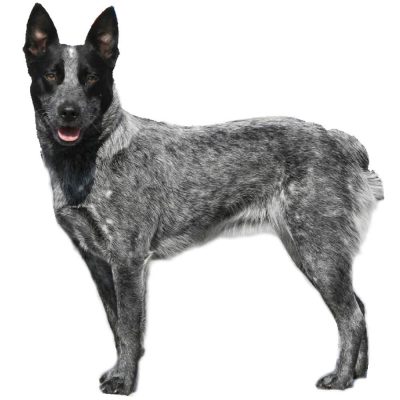 The Australian Stumpy Tail Cattle Dog was one of the first working dogs and possibly the very first purebred dog to be developed in Australia specifically for Australian conditions. The ASTCD was developed to assist the early settlers and stockmen to bring in wild and semi wild cattle from some of the harshest and most remote areas of the colony, as the dogs brought out from England in the early days of colonization were unable to bear the climate and rough terrain and were unused to working with cattle that were not domesticated.

The ASTCD and the ACD were shown up until the mid to late 1920’s in the same classes and were registered as “Cattle Dog“(Long Tail) and “Cattle Dog“(Stumpy Tail). It was not until 1927 that the two breeds were recognized, and subsequently, exhibited as separate entities.

During the mid 1900’s, the Stumpy Tail began to die out. However, one family in Queensland, the Heale family, of GlenIris Kennels continued breeding ASTCD maintaining the purity of the breed. For some considerable time, their dogs were the only pedigreed, registered dogs in all of Australia. The breed appeared to be destined for extinction.

In 1988, the Australian National Kennel Control, fearing the loss of Australia’s first working dog, formed a Development Register in an endeavour to rescue the breed. The Development Register was based on a grading system. Owners of the dogs closely resembling ASTCD were invited to take their dogs to Grading Days. Three conformation judges graded the dogs presented from A to D. Those dogs most like the ASTCD receiving an A grade. Subsequently two A grade dogs could be mated and their progeny could enter the show ring with a pedigree.

Without the foresight and commitment of those instrumental in instigating the Redevelopment Scheme, the ASTCD would have been lost as a registered breed and may well have faded from the rural scene as well.

December 2006 saw the closure of the grading scheme for the breed as it is obvious by the number of dogs now registered, (in the vicinity of 4000), that the foresight of the ANKC has been instrumental in getting Australia’s oldest breed of dog back on its feet.

The ASTCD has great working proficiency; biting low and immediately dropping to the ground to avoid the otherwise resulting kick. The breed is very popular on the land for working cattle as it is a very hard, loyal working dog with great endurance.

From their humble beginnings, the “Stumpy” is still proving to be an invaluable asset on the land as a hard working, loyal cattle dog.

“The Stumpy” now stands proud in whatever discipline, whether it be representing in the breed ring – obedience – agility – herding – working or just as a family pet and faithful companion/mate.

Appearance:  Medium sized body. Eyes are dark, ears are erect. Tail is short (stumpy). These dogs features are very similar to the Australian Cattle Dog, but they do have seven differences in their make-up, e.g. shorter body, flatter skull, Hindquarters angulation, the tail short which is not docked, black markings are allowed.

Temperament: Very alert, watchful and obedient, affectionate and responsive to its owner, but reserved towards strangers.

Characteristics: Possesses a natural aptitude in the working & control of cattle. It is ever alert, watchful & obedient, though suspicious of strangers.

Coat: The outer coat is moderately short, straight, dense and of medium harsh texture. The undercoat is short, dense and soft. The coat around the neck is longer, forming mild ruff. The hair on the head, legs and feet, is short.

Grooming: Little care is needed for their coarse, short-haired, weather-resistant coat, a brush and a bath when necessary.

Exercise- these dogs have incredible stamina and enjoy whatever activity you can give them. Without exercise and things to do they become bored and destructive

Health- This breed is extremely hardy some may suffer from hereditary deafness and some eye problems.