Recommended for: Experienced and knowledgeable handlers. Not a Beginners Dog.

Note: This breed is recognized by the SABT, APRI, HBSA, EBBASA, RIBC, SMBA, USBA. . This dog is not a recognised breed with the Australian governing body (ANKC). So when purchasing a pup try to buy from breeders who are registered with another governing org’s, such as Boerboel Austalia Inc. 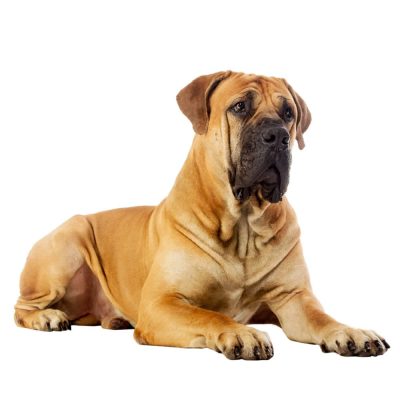 The Boerboel was developed in South Africa over 400 years from Bullenbijter and Barenbijter dogs bought by settlers in the early 1600’s.

The word ‘Boerboel’ is an Afrikaans term meaning ‘farmer’s dog’. The name reflects how he was bred in 17th century South Africa to protect farmsteads from fearsome predators, such as lions, leopards, and hyenas.

This massive dog makes for an intimidating guard dog that is confident and assertive, and prepared to take on anyone who invades his territory. But the other side of the Boerboel is that he’s also a gentle giant with those he welcomes into his pack. This makes him a surprisingly loving dog with children – although this carries some provisos.

The size and power of the Boerboel means that good socialisation in puppyhood is essential. He needs to be raised with a broad experience of people and situations, since an anxious or fearful Boerboel would be exceptionally dangerous. He also needs an experienced, skilled handler. Anyone who attempts to control the Boerboel using brute strength is going to lose out.

Character
The Boerboel is the only breed in the world specifically bred to guard and protect and act as a watchdog. A temperamental dog that stays surly after being reprimanded is not desirable. You should purchase a Boerboel for his even character, this was and always should be his main quality.

Your Boerboel should consider himself as your best friend. He should know what you are thinking, when you feel threatened, he should know when you disapprove of a stranger and share your feeling. He should be able to recognise your fear. These traits should be recognisable from puppyhood.

If you allow him to attack, he will growl like a lion and fight ferociously with no regard for his own safety.

With the correct handling he will be a child’s friend and playmate. He does not only accept one person as his master, but accepts the protection of the whole family as his duty and is affectionate to all of them. He feels the whole family belongs to him and his sole purpose is to protect them, with his life, if necessary. This is why this  breed must have an experienced owner.

Colour: Yellow, tawny, reddish-brown, and all shades of brindle. We are looking for little to no white. White is accepted on chest, toes (should have black toenails) and a small stripe on muzzle. It will be considered a fault if anywhere on dog’s upper thighs or legs, back, or neck.

Grooming: Easy to groom, an occasional brushing and a bath when need. This breed is an average shedder.

Exercise: The Boerboel will get a lot of necessary exercise if they have a large yard to run and play. However they need to be taken on a long daily walk. Boerboel love to play.

Health: Due to natural selection the Boerboel is a very healthy breed.