Note: Breed is not originally a domestic pet but rather a wild dog domesticated by Inuit for specific tasks in a harsh arctic environment.
Not many, if any in Australia 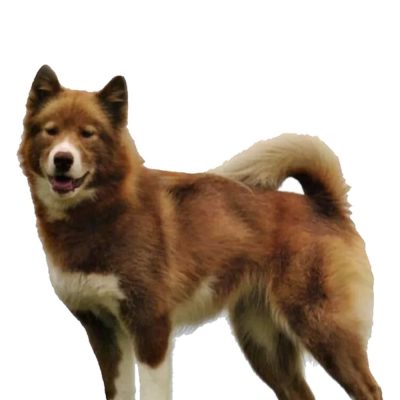 The Canadian Eskimo Dog is an aboriginal breed of dog that has gone through many name changes. As a breed, The Canadian Eskimo Club has, in the past, referred to the dog as the “Esikomo”, “Exquimaux Husky”, “Esquimaux Dog” and “Husky”.

The Inuit of Arctic Canada called this dog “Qimmiq”. The breed has an 1100 to 2000 year history of being interdependent with the Thule culture and Inuit who, following the Dorset culture, occupied the coastal and Archipelago area of what is now Arctic Canada.

Although within the spitz family of dogs, the Canadian Eskimo Dog’s origin prior to this is lost in the Inuit prehistory which includes the migration of the Mongolian race from the Asian continent to North America. The existing strain of Canadian Eskimo Dog originated from stock primarily bred by the Eskimo Dog Research Foundation in the Northwest Territories.

The foundation’s work over a six year period was mainly funded by the Governments of Canada and the Northwest Territories and involved the purchase of specimens from the remnant population of dogs kept by the Inuit of the Boothia Peninsula, Melville Peninsula and parts of Baffin Island.

The Canadian Eskimo Dog, as a primitive dog, is primarily a carnivorous breed, whose natural diet consisted of seal, walrus, fish or caribou. For centuries this breed was used as a draught animal and was capable of pulling between 45 and 80kg per dog, covering distances from 15 to 70 miles per day. He was also used as a hunting dog, to locate seal breathing holes for Inuit hunters. As a hunting dog he would also attack and hold at bay musk ox and polar bear for the Inuit hunters. In summer the dog was used as a pack dog carrying up to 15kg.

Appearance: Powerfully built, moderately sized dog with a thick neck and chest and medium length legs. Typical of the spitz family of dogs he has a wedge shaped head held high with erect ears. The eyes are obliquely set giving a serious appearance. The dog has a bushy tail carried up or curled over the back.

Temperament: Tough hard-working, the mature Canadian Eskimo Dog is gentle & affectionate with the average individual, enjoying attention. Even with total strangers the dogs are rarely standoffish.

Characteristics: Usually they will exhibit a rather quiet friendliness and harmless curiosity or become completely distant. The dog is very pack oriented and if raised in a group, dominant and subordinate roles will be acted out under the leadership of a totally dominant or boss dog.

Colour: Any colour or combination of colours are permitted. The most common are black, white, red, gray, silver, and cinnamon (lighter red).

Coat: The coat is thick and dense with hard, stiff guard hairs. It varies from 3-6 in (7.5-15 cm) in length with a thick, mane-like growth over the neck and shoulders. The dense undercoat protects the dog from extreme temperatures.

Exercise: Vital to the health and mental wellbeing of this breed is exercise. This breed has an enormous amount of energy, and their exercise requirements reflect this. Without exercise and stimulation, boredom will set in which could lead to destructiveness.