Recommended for: People with knowledge of the breed 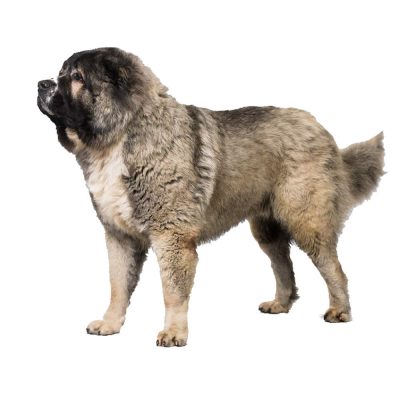 The Caucasian Shepherd Dog (CSD) is considered to be the breed taking its origin from ancient Caucasian dogs. The breed’s expansion covers territories from the Caucasian Range and the steppe regions of Southern Russia. The evolution of the breed was not only a result of natural selection but also influenced by nations that inhabited the Caucasian Region.

Historically Caucasian Shepherd dogs were used for guarding and safe-keeping of herds, flocks and dwellings from beasts of prey and predators. The first mention of a large molossoid dogs used by the army of Armenian Tsar Tigran the II dates from the 1st century BC. Selection work with the breed started in the USSR in the 1920s.

Obligatory qualities such as physical power, self-confidence, fearlessness, sharply developed hearing, good sight, and a dense and waterproof coat have been cultivated in the process of selection. All these qualities as well as endurance allows people to use the Caucasian Shepherd Dogs in all kinds of climatic condition including the most severe ones.

The Caucasian Shepherd Dog is not for novice dog owners. While they are capable of being loving, loyal family dogs and fierce protectors, they are also naturally distrustful of strangers and do not take well to dogs or other animals that they aren’t familiar with. In general, they are low energy and laid back, but they are also highly territorial and never back down from a fight, even if that means taking on a bear or a wolf.

Although Caucasian Shepherd Dogs are intelligent, they can also be quite stubborn, which may make training difficult. They need firm boundaries, patience, and consistency. This training should begin as early in life as possible, and socialization is practically a must. Proper socialization training has to be done to overcome the breed’s apprehension around new people and animals, which can result in aggression. However, with humans they are familiar with, the Caucasian Shepherd is quite loving and loyal and will make for a lifelong guardian and protector.

Appearance: The Caucasian Shepherd Dog is a harmonious built, large, strong dog with plenty of bone and powerful muscular system; of a slight rectangular format.

Sexual dimorphism is well pronounced. Males are masculine, with well developed withers and a bigger head in comparison with females. They are also more massive, bigger and often shorter in body than females. In dogs with longer coat-variety males have a distinctly pronounced mane.

Temperament: Behaviour is steady, active, self-confident, fearless and independent. The Caucasian Shepherd Dog shows a devoted attachment to its master; it is an excellent guard dog.

Coat: Skin: Thick, sufficiently elastic, without any folds and wrinkles.
Hair – Straight, coarse, stand-off coat with well-developed undercoat. The length of guard coat as well as the undercoat should not be less than 5 cm. The coat on the head and forelegs is shorter and thicker. The tail is completely covered with dense coat and looks thick and furry. The longer outer coat forms “brushes” on the ears, a “mane” around the neck and “trousers” on the back sides of the thighs

Colour: Any solid colour, piebald or spotted colour. Except for solid black; diluted black or black in any combination or genetic blue or liver brown colour.

Grooming: Double coat should be brushed at least twice a week to remove loose or dead hairs and prevent matting. Caucasian Shepherd Dogs go through a heavy shed once a year. Bathing and extra brushing can help move this shedding along more quickly. Bathing can be a chore with a dog this size, so it may be wise to just bath them as needed or rely on a professional groomer.

Exercise: Need to be exercised regularly to keep them fit and healthy.

Health: Need to be exercised, and their weight should be monitored as can get overweight. Can be prone to hip dysplasia and cataracts.