Recommended for: People with the knowledge of the breed.

Note: Not many in Australia 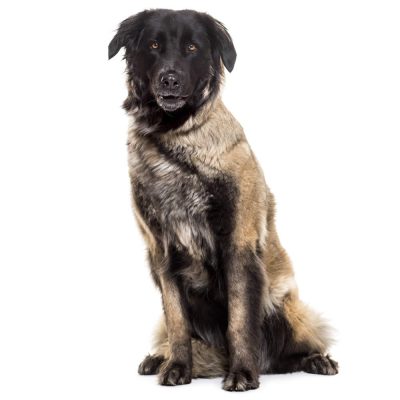 The Estrela Mountain Dog may be considered as one of the oldest breeds of the Iberian Peninsula living from early times in the Serra da Estrela (high mountains in the North of Portugal).

As a sheep and watch-dog, he protects the flocks against the wild animals still living in these regions. These dogs may also be found scattered in other parts of the country, mainly in the center, but all originate in the Estrela mountains.

Those early guardian dogs were not the distinct breed we know today. Rather, the Estrela developed over a period of hundreds of years. Shepherds would have chosen to breed the dogs that had the characteristics necessary to survive in their mountain environment and to do their job.

The first recorded breed standard was published in 1922. This standard only reflected the functional features naturally found in the best dogs of the time, although it did mention having dew claws as reflecting a “perfect” dog. The characteristic hooked tail and turned-back (rosed) ears, which later became part of the official standard, were not mentioned in this preliminary standard.

The first official breed standard was written in 1933. The standard has undergone small refinements since then. There is no record of the Estrela outside Portugal before 1972. In 1972 and 1973, pairs were imported to the US. It was not until 1998 that the first EMDAA recognized dog was imported into the United States. The United Kingdom was the first country to establish the breed outside Portugal in 1972.

Today the Estrela can be found in many countries but remains true to its guardian heritage. It is still a working dog, guarding flocks in its native Portugal and elsewhere (the Portuguese Marines had even used them as patrol dogs). It is also an ideal family pet because of its alertness, loyalty, intelligence, and it’s instinct to nurture young; all features it needed in its earliest days.

Appearance: Large, mastiff-type molossoid dog. There are two varieties of coat: long and short. Rustic, substantial, with brisk gait and an impressive attitude. Breed has a lively, calm and expressive look; it is well proportioned; well made with harmonious appearance, which is traditionally how the breed has been recognised since a long time.

Temperament: Inseparable companion of the shepherd and faithful flock guardian, bravely protecting it against predators and thieves. Wonderful farm and house guard, distrustful towards strangers and typically docile to its master.

Coat: Strong, very abundant, slightly coarse, without excessive harshness, the texture is similar to goat hair. The undercoat is composed of fine hair, short, abundant and entangled, normally lighter in colour than the outer coat.

Long-haired variety: Straight or slightly wavy topcoat, uneven in some areas. It is shorter and more dense on the limbs, below the elbows and hocks, as well as on the head; on the ears, it becomes gradually shorter from the base to the tip, becoming thinner and softer. It is longer on the tail, which is bushy, thick and feathered, around the neck and throat and on the buttocks, which are abundantly feathered, as well as the back side of the forearms.
Short-haired variety: Short hair, evenly distributed over the body, slightly shorter on the head and limbs, without feathering.

Colour: Solid: yellow, fawn and grey in all ranges of colour intensity; – Wolf Grey: fawn, yellow and grey tones, commonly in lighter and darker shades.
Brindle: Fawn, yellow or grey base colour with blackish brindling. In the cranium-facial area, a dark coloured mask is typical.

Grooming:  A good brushing at least once a week is needed.

Exercise: Make sure your dog gets at least one good half-hour to hour-long walk per day with a few good, active play sessions and shorter walks mixed in.