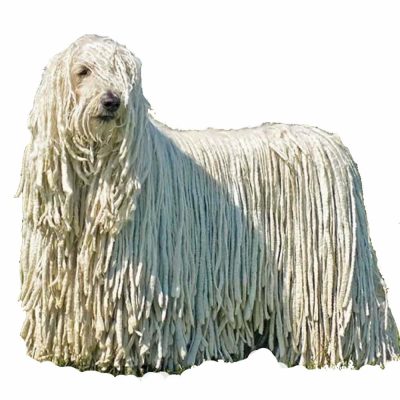 The Komondor is known as the King of the Hungarian livestock guarding dogs, it is an ancient breed and while its homeland has been Hungary for many centuries, it is generally thought to be a descendent of the Russian Owtcharka brought to what is now Hungary by the invading Magyars.

They are a big muscular fearless dog, which were bred to guard flocks of sheep or other livestock against predators such as wolves, coyotes, feral dogs, or human predators. Their long corded coat protects them against the elements and the predators. Despite their size, they are astonishingly fast, agile and light on their feet. They are calm and steady when things are normal but in cases of trouble, they will leap to defend. They were bred to think for themselves and are usually intelligent.

They are extremely affectionate and devoted to their family and gentle with the children of the family. They are wary of strangers, but will accept them when it is clear that no harm is meant.

They are very protective of their family, home and possessions. They will instinctively guard them without any training, because of this fact they need to be well socialized and trained from a young age; firm but not harsh handling is needed.

Generally, given the proper environment and care, a Komondor is a responsible, loving dog.

Temperament & Characteristics: Total courage in the guarding and defence of the herds entrusted to him and the property and home of his owner. He attacks silently and enduringly. He regards his territory as his own property and will not tolerate any other living creature in it. His nature is suspicious.

Grooming: At the age of about 9 months the coat naturally starts to cord; to keep the cords from becoming matted clumps care is taken to help the cords to stay apart. Once this is achieved, most coat care is small. Wash when needed. They can also be clipped and the coat kept short.

Exercise: They are a big dog and need plenty of exercise.

Health: A hardy working breed with almost no health problems. Some can suffer from hip dysplasia, entropian and bloat.