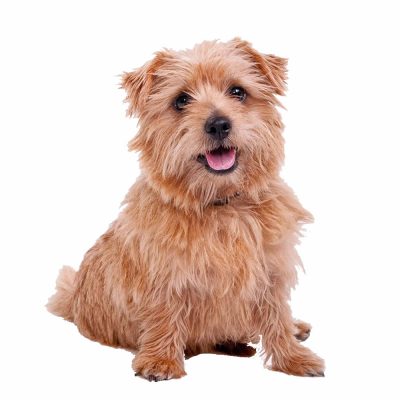 Norfolk’s are one of the smallest of the working terriers, a natural ratter, they display a great deal of courage. Although an outgoing, energetic terrier, the Norfolk is not quarrelsome, is a sensitive dog, and can become stubborn without an understanding owner.

They are a lovable little dog with a good nature, friendly with people and children, but can try to be dominate around other dogs. They are alert, smart and easy to train.

Characteristics: One of the smallest of terriers, a ‘demon’ for its size. Lovable disposition, not quarrelsome, hardy constitution.

Grooming: The shaggy coat can be clipped to help keep maintenance low. Regular brushing will keep it neat and tidy, wash when needed.

Exercise: they thrive on an active life, so regular walks, runs and plays are needed to keep them fit and happy.

Health: This breed can suffer from genetic eye diseases.