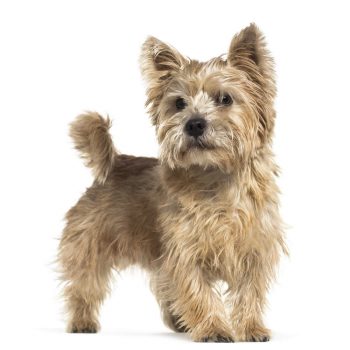 Originally Norwich Terriers used to be highly appreciated dogs used for killing rats and hunting foxes. Today, they are lively and sociable family dogs. They are ideal for both the city and the countryside.

They are a little dog with a good nature, friendly with people and children, but can try to be dominate around other dogs. They are alert, smart and easy to train.

Appearance: Small, low, keen dog, compact and strong with good substance and bone. Honourable scars from fair wear and tear not to be unduly penalised.

Characteristics: One of the smallest of the terriers. Lovable disposition, not quarrelsome, tremendously active with hardy constitution.

Grooming: The shaggy coat can be clipped to help keep maintenance low. Regular brushing will keep it neat and tidy, wash when needed.

Exercise: they thrive on an active life, so regular walks, runs and plays are needed to keep them fit and happy.

Health: This breed can suffer from genetic eye diseases.