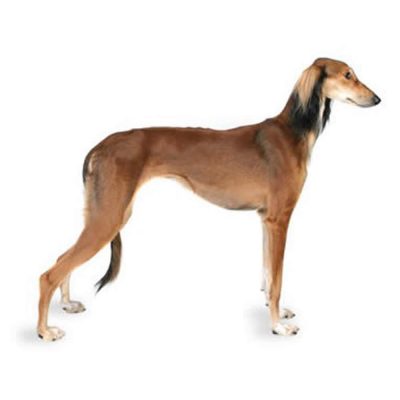 The Saluki is the oldest known breed of domestic dog. It is depicted in carvings of early civilizations such as that of “Sumerian Empire” dating back to 8000 -7000 BC and in Egyptian tombs of 2000 BC.

Due to the nomadic nature of the Arabs, the Saluki was found on the entire coast of north Africa, in the Sahara, the Sudan, Egypt and the whole of the near East and this is why they vary in size and amount of feathering, each being related to the area from which they came. They are related to the Greyhound and the Arabs found their speed and agility invaluable.

They are very loyal, gentle and affectionate and quickly become part of the family. They can be aloof around strangers. While easy to train they become nervous and timid if training is harsh or the trainer’s manner is overbearing.

Appearance: The whole appearance of this breed should give an impression of grace and symmetry and of great speed and endurance coupled with strength and activity to enable it to kill gazelle or other quarry over deep sand or rocky mountain.

Temperament: Loyal, affectionate and, because of its keen sense of hearing, makes a good watchdog.

Coat: Feathered– Straight with feathering. Smooth– Short with no feathering.

Grooming: Brushing the coat regularly will keep it looking tidy and bath when needed.

Exercise: they need to be able to have off lead running as well as daily long walks.

Health: This breed is generally sound but some can suffer from genetic eye problems.