Recommended for: Experienced and knowledgeable handlers. Not a Beginners Dog

Note: If not well socialised from a young age may become aggressive towards other dogs 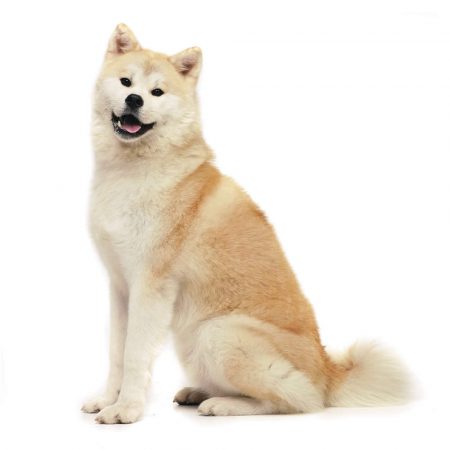 Originally Japanese dogs were small to medium in size and no large breeds existed. Since 1603 in the Akita region, Akita Matagis (medium-sized bear-hunting dogs) were used as fighting dogs. From 1868 Akita Matagis were crossed with Tosas and Mastiffs. Consequently, the size of this breed increased but characteristics associated with Spitz type were lost.

In 1908 dog fighting was prohibited, but this breed was nevertheless preserved and improved as a large Japanese breed.

As a result, nine superior examples of this breed were designated as Natural Monuments in 1931.

When World War II ended, Akitas had been drastically reduced in number and existed as three distinct types:

This created a very confusing situation in the breed.

During the restoration process of the pure breed after the war., Kongo-go, a dog of the Dewa line, which exhibited characteristics of the Mastiff and German Shepherd.

However, knowledgeable fanciers did not approve of this type as a proper Japanese breed, so they made efforts to eliminate the strain  by crossbreeding with Matagi Akitas for the purpose of restoring the original pure breed. They succeeded in stabilizing the pure strain of large sized breed as known today.

Temperament: The temperament is composed, faithful, docile and receptive.

Colour: Red fawn, sesame (red fawn hairs with black tips), brindle and white. All the above mentioned colours except white must have urajiro .
(Urajiro = whitish coat on the sides of the muzzle, on the cheeks, on the underside of jaw, neck, chest, body and tail and on the inside of the legs).

Coat: Outer coat harsh and straight, undercoat soft and dense ; the withers and the rump are covered with slightly longer hair ; the hair on tail is longer than on the rest of the body.

Exercise: They need moderate but regular exercise to stay in shape.

Health: A robust breed but can have some problems with Hip Dysplasia, bloat, eye problems and thyroid problems. They need a good diet. To much red meat or food colours in their diet may cause hot spots and other skin coat problems.