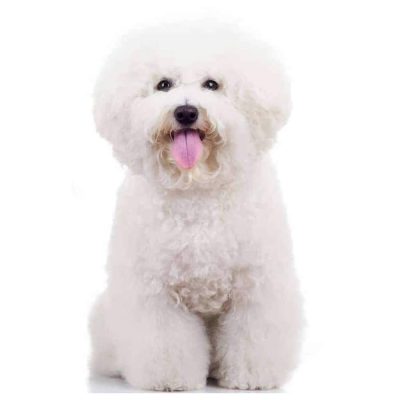 The Bichon Frise originated from the Mediterranean Barbet, originally known as the “Barbichon”, the French shortened the name to Bichon and added the word ‘Frise’ which means frizzy.

The Bichon of Malta (known as the Maltese today) is a close relative. 14th century sailors are thought to have taken them over to Europe from Tenerife. In the 18th century the royal whims turned to other dogs and the Bichons became the dogs for commoners but their winsome ways and agility soon brought them fame as circus dogs and organ-grinders’ dogs.

After World War 1, the servicemen took a liking to these little dogs and, once again, the French breeders took notice of them. In 1934, a standard was drawn up and the breed was renamed by the president of the International Canine Federation, Madame Nizet de Leemans. Its proper plural is Bichons Frises.

They have great character about them, always playful and happy out going dogs. They are intelligent and easy to train. They are not a yappy dog and fit in well to apartment living.

Appearance: Toy dog standing less than 30cm tall. Eyes Dark. Ears coated and hang to the side of the head. Tail carried over their backs.

Colour: Pure white. Under the white coat dark pigment is preferred. Black, blue or beige markings are often found on the skin

Grooming: The coat does not shed and does need plenty of brushing to keep it looking good. It can be easily maintained though if it is trimmed back to about 1.5cm long all over. Bathing about once a month or when needed.

Exercise: Although playing around with them will take care of most of their exercise needs, a walk a day will top it off.

Health: No problems particular to the breed.