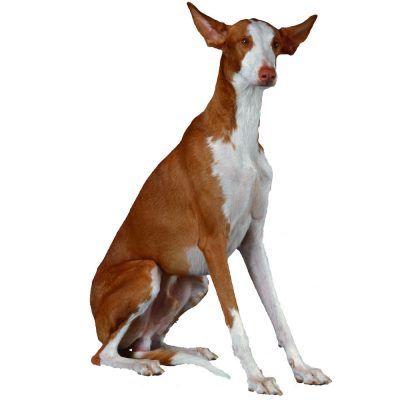 The Ibizan [pronounced iBeethan] Hound originates from the Mediterranean Sea region. The hieroglyphics of the ancient Egyptians depict hounds of a very similar type, more so than the Pharaoh Hound on the pied markings alone, a feature that the Pharaoh Hound lacks. In fact the only similarity between the two breeds are their large ears. When looking their respective breed standards one can clearly see the two are completely different species.

In modern times the Ibizan Hound obviously originates from the island of Ibiza, situated off the East coast of Spain.

The Ibizan Hound itself is a hound of great character, tremendous hunting ability, being able to use all it’s three senses eye’s ear’s & nose, very alert and agile, being able to leap high from a standstill, and also with capability to do this at a run, very similar to an antelope.

The Ibizan Hound is trainable for the show ring, obedience, agility, lure coursing and tracking. They are well suited to family life, and are their happiest when joining in with their families activities.

Characteristics: Very active and alert dog, better suited to rural living; however, with proper exercise it can also thrive in an urban environment. Males may not get along well with each other.

Colour: White, chestnut or lion colour or any combination of these.

Coat: Smooth or rough [similar to a Deer Hound] always hard, close, dense. Longer under the tail and at the back of the legs.

Grooming: Little grooming is required but when needed a Hydro bath is recommended to aid in the removal of dead hair and dirt, brushing whenever needed.

Exercise: walking and running off the lead in secure areas is recommended.