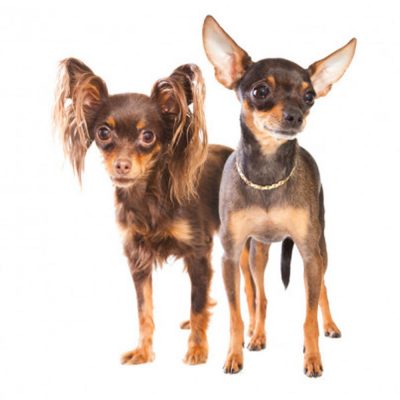 These dogs look like chihuahuas but are completely different! They are smaller, are a lot more active, generally a lot healthier (not overbred), quieter and way friendlier.

At the beginning of the 20th century, the English Toy Terrier was one of the most popular toy dogs in Russia. However, in the period 1920 – 1950 the breeding of pure toy terriers was almost stopped and the number of dogs fell to a critical level. Only in the mid-fifties did Russian dog-breeders begin the revival of the breed.

Practically all dogs which were used for breeding had no pedigrees; many of them were not pure blood. The Standard drafted for Russian Toy Terriers was very different from that the English Toy Terrier. From this moment, the evolution of the breed in Russia went its own way.

On the 12th of October, 1958 two smooth-haired dogs, one of which had slightly longer hair, gave birth to a male dog with spectacular fringes on ears and limbs. It was decided to keep this feature. The male was mated with a female which also had slightly long hair. Thus the longhaired variety of the Russian Toy appeared. It was called Moscow Longhaired Toy Terrier.

It was during a long period of development, in an isolated context, along with a specifically conducted selection that a new breed was created: the Russian Toy with two varieties: long-haired and smooth-haired.

Temperament: Active, very cheerful, neither cowardly nor aggressive. The behaviour is significantly different between males and females.

Coat: The coat of this breed is categorized by two, the long haired or smooth coated. The only difference by the two is the long hair on the ears of the long haired type which is usually 3-5 cm long and can be straight or with a slight wave.

Grooming: For the short-haired – brush on an occasional basis, also wipe over with a damp cloth can be sufficient.  Long-haired brush on a daily basis using a soft-bristled brush, also bath once a month.

Exercise: Active and agile breed needs regular play sessions and daily walks to assist them to be in good health.

Health: One of the main health issues has to do with teething.  If corrective action is not taken, gum infections and bad breath arise. Russian Toy also suffer from a condition known as patellar luxation.