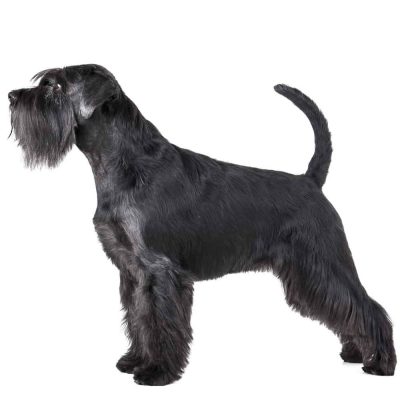 Dogs were used in this mountainous region by mainly shepherds, who brought together several breeds to help them with their flocks and for other general purposes associated with their lifestyle.

These dogs were used to herd and guard the flocks and homes from predators of all kinds, and control vermin. These dogs grew in popularity in the fifteenth & sixteenth century as tradesmen & merchants used the breed to protect their wagons as they travelled the countryside.

Modern Schnauzers are not well known for their special abilities but they have been very successfully trained for Scenting, Tracking, Herding, and Police Work etc. Versatile and Adaptive are accurate descriptions.

Schnauzers do best with close interaction with his human family. The breed has a very clever, inquisitive, creative and sometimes stubbornly determined mind.

When raised properly the Schnauzer makes an affectionate friend and confidant for children. They can also fit in well with young families and with less active older people.

Appearance: Sturdily built body. Rectangular shaped head which has bushy eyebrows covering the dark oval shaped eyes. Ears hang to the side of the head. Tail was usually docked but now left natural.

Grooming: The owner of a Schnauzer kept strictly as a companion and family pet has two options as to grooming. The first and easiest option is to take the dog to your local groomer and have them ‘machine clip’ the coat. This should be done every six to eight weeks and is fastest and easiest. However, clipping makes the coat much softer every time it is done, the characteristic pepper and salt colour fades out and black dogs lose their shine. The second option is to
‘hand-strip’ the topcoat, doing it yourself or finding an experienced handler or breeder that is willing to do it for you. Hand stripping preserves the natural harsh coat and maintains the original colour. It is essential for a dog that is to be shown and will require maintenance at least twice per week.

Exercise: regular exercise is needed, daily walks and off lead runs to keep them fit and happy. They also love the water so swimming would be fantastic.

Health: This breed is generally sound.