Recommended for: People willing to learn about the breed and cater for the dogs needs. 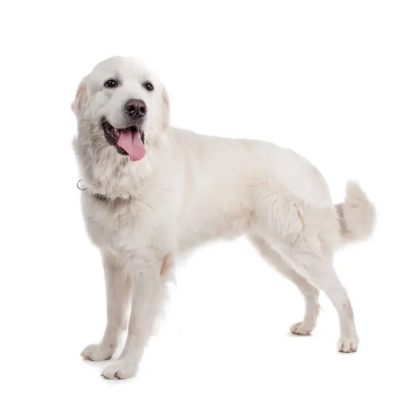 The Tatra Shepherd Dog is one of many so-called mountain dogs descending from the Tibetan Mastiff. Its ancestors were brought into Europe with nomadic tribes of Huns and Awars (4th-6th century AD) that settled the Hungarian Plains.

Dogs of this type were later bred by the shepherding tribes of Wallachia, who eventually settled in the Tatra Mountains in the 15th century. The Tatra Shepherd Dog is a close relative to some other breeds known in the mountainous areas of Europe, the Slovakian Chuvac, Maremma Sheepdog and Pyrenean Mountain Dog.

The Tatra Shepherd Dog is of good size, strong, resistant, courageous and stable, but aggressive when provoked. Their traditional colour is pure white.

Appearance: Strong and compact build giving the impression of stamina and mobility.

Coat: On head, muzzle, front part of forelegs and on the hind legs from the hock downward the hair is short and dense. The neck and body are covered with long, thick, straight or slightly wavy hair which is hard to the touch. Undercoat is profuse. On the neck a rich ruff and the thighs are covered with profuse, long hair. On the tail the hair is also profuse, forming a flag.

Grooming: Long thick snowy coat, double layered coat. It’s largely self-cleaning; he rarely needs bathing, and never needs professional grooming. But the Tatra sheds heavily so to limit this brush him daily and capture the shed hair on the brush.

Exercise: Plenty of exercise – preferably of the slow sustained sort where he walks for hours at a time. He also loves being outdoors, so if considering a Tatra you need ready access to a large yard that is securely fenced.