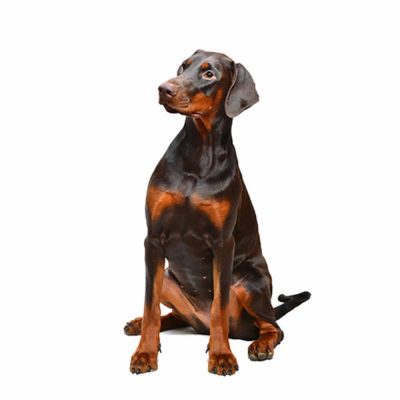 The Dobermann was developed in Germany by Louis Dobermann, he did so by using a number of breeds including, Rottweilers, German Shepherds, German Pinchers and Manchester Terriers. In doing this he produced his ultimate guard dog.

The history of the Dobermann has been documented by many very reliable authors, who have sometimes spent a lifetime with this one breed of dog.

It is highly recommended that anyone interested in including one of these magnificent animals in their family, to purchase and read at least one book (preferably more) that is written by these authors. It is also important that the potential new owner belong to a local Dobermann club & get to know the people who have experience in this breed, ask questions concerning training, nutrition, exercise and temperament of the breed.

The Dobermann is a noble looking, elegant, powerful, and highly intelligent animal. The feelings between a Dobermann and its owner are reciprocal, the love and devotion that one has for the other is a mutual giving and receiving. That is one of the amazing benefits of ownership of this breed of dog.

It is important to understand that in the early years of the Dobermann the breed was valued most for its aggressiveness. It had a use at that time, it was a working dog, used in guard work and policing.

Today responsible breeders are aware of the importance of temperament and will not knowingly place an aggressive dog into a family situation. The aggressive types must be trained by a dominant (not abusive) owner who has a job for the Dobe to do. A new owner to the Dobermann breed should have the common sense to research and get to know the breed very well before buying. Today’s Australian breeders have mostly bred out any vicious traits.

Appearance: Medium size, muscular and elegant, with well set body. Of proud carriage, compact and tough. Capable of great speed. Wedge shaped head with dark almond shaped eyes. Ears hang to the side of the head. Tail usually docked but now may be left natural.

Characteristics: Intelligent and firm of character, loyal and obedient.

Colour: Definite black, brown, blue or fawn (Isabella) only, with rust red markings. Markings to be sharply defined, appearing above each eye, on muzzle, throat and fore chest, an all legs and feet and below tail. White markings of any kind highly undesirable.

Grooming: Coat is easy to take care of and bath when needed.

Health: This breed is generally very sound but some can suffer a number of health issues which can occur within the Dobermann breed:

Breeders should test their breeding stock & be aware of any health issues within their breeding lines. This is one of the reasons why it is so important to always purchase your Dobermann from a registered breeder.