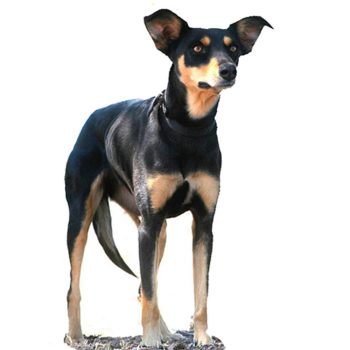 There are two separate registries for Kelpies. The Working Kelpie Council encourages breeding for herding ability, and allows a wider variety of coat colors than does the Australian National Kennel Council, which encourages breeding for a certain appearance and limits dogs to certain colors, apparently promoting solid colors over others.

The Working Kelpie comes in three coat types, smooth, short and rough, with almost every colour from black through light tan or cream. Many Kelpies have white blazes, a few have white points. Kelpies used to have a double coat, but this has largely disappeared, possibly due to environmental factors.

Ears are usually pricked, but about 20% will have one or both ears flopped; the tail will often follow the coat type, and will vary between smooth to bushy. Cosmetic features have no relationship to the dog’s working ability, so stockmen looking for capable working dogs usually disregard the dog’s appearance.

Working Kelpies stand about 50cm at the withers for females, 55cm for dogs; weight would be between 14-21Kg. Show Kelpies are generally heavier and shorter.

The background of the Australian Working Kelpie is both, fascinating and complex.

The Kelpie came about because Australian sheepmen needed a dog that could work sheep on the outback properties, under variable and harsh conditions. The various breeds of sheepdogs from Europe and the UK were too heavy coated to cope with the severe conditions of the Australian climate and geography. The wonderful breed came from two black and tan short coated pricked eared collies imported by a Mr Elliott and a Mr Allen in the 1860’s.

These dogs have a natural instinct for working with sheep and display exceptional abilities in their scent, sight and hearing. They are always very alert and eager with an enormous amount of energy. They adapt to family life and are great pets as long as there are kept active.
The Kelpie has excelled in the areas of Obedience, Agility and Tracking.

Appearance: Medium sized body. Head is in proportion to the size of the dog, with medium sized, almond shaped eyes and triangular, erect ears. Active dog of great quality, showing hard muscular condition combined with great suppleness of limb and conveying the capability of untiring work.

Characteristics: Almost inexhaustible energy, with marked loyalty and devotion to duty. It has a natural instinct & aptitude in the working of sheep, both in open country and in the yard.

Coat: Double coat with a short dense undercoat. Outercoat is close, each hair straight, hard, and lying flat, so that it is rain-resisting.

Grooming: Minimal care is needed, a brush and a bath now and then, or when needed.

Exercise: Plenty of exercise is needed to keep then fit and their mind occupied, they can become bored and destructive if they are not.